for the important Memorial Day, Ampow gives the best Memorial day sales 2019 and provides an Extreme Deal for RC hobby batteries. Good news for us Hobbyists! This activity will last 10 days from 27th May to 5th June. 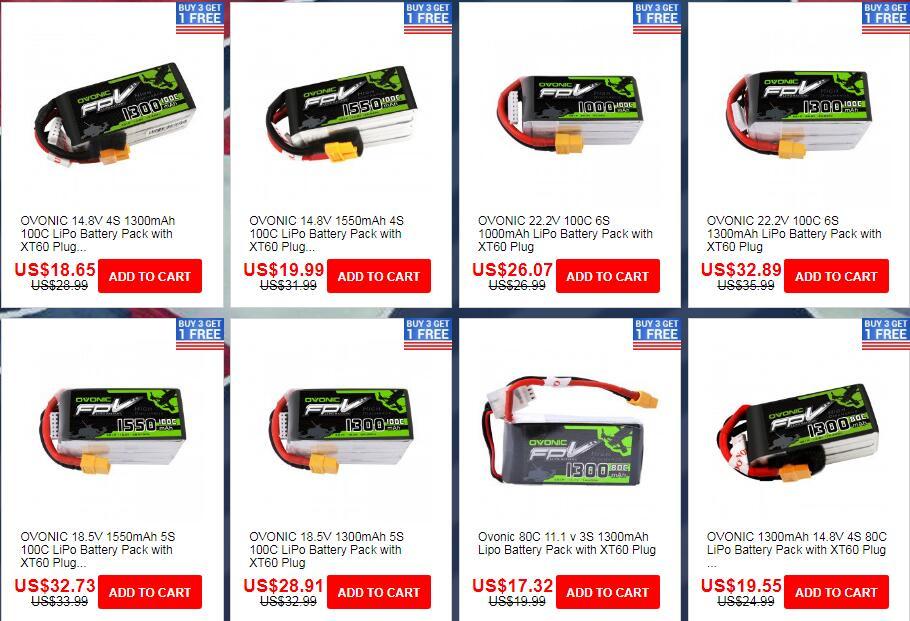 Up to 50% off for RC Airplane Batteries


In addition, there is a great discount for and airplane batteries. Especially for RC airplane batteries, You’ll save a whopping 50%. great deals on battery for small foam plane, park flyer, glider, X-class drone, and 64mm-80mm EDF jet and more. So What are you still waiting for?

Traxxas X-Maxx at a glance

The X-Maxx is widely considered the top-of-the-line model from US giants Traxxas. Its tough chassis and powerful 4WD transmission make for some incredible performance.

The X-Maxx in Action


So straight to what you want to see, the X-Maxx in full flight. Rocking two 4S 6700mAh batteries the performance out of the box is simply unrivalled. Few in the office had ever driven an RC car with this much power and the TSM system is a welcome help for beginners! Any sort of loose surface allows for wide controlled powerslides, fast turns allowing the truck to lift its inner wheel as the weight shifts to the outside of the corner.

Just keeping up with the camera was a job in itself with the truck happy to hammer along at 40+mph!

Practising on soft surfaces, we tuned our driving style, getting used to the weight and inertial ‘moment’ when the vehicle was airborne. When off the ground the vehicle felt almost like it could defy gravity, with huge hang-time before it pounded back to the dirt.

What is better than a Traxxas X-Maxx?


We got in contact with friend of RC Geeks and fellow X-Maxx owner Dan, to join us for a tear up in the park because the only thing better than a Traxxas X-Maxx is two X-maxx!

Dan’s X-Maxx features a different gearing ratio, a revised speed controller, shock covers and a few other tweaks. He also ran a pair of hobbyking batteries with a higher burst rating, taking advantage of that speed controller.

With two competitive drivers at the controls it was interesting to see the differences the modifications made.

Dan’s red liveried Xmaxx had a clear top speed advantage and its ‘punch’ would balloon out the tyres under heavy acceleration loads.

As a result our X-Maxx (which we previously couldn’t have imagined with any more power) was left behind on long drag races!

It was great to hear from a user who had run the truck for several months, especially that the ownership experience (bar issues with shell mounting) had largely been trouble free.


Whilst the truck has great ground clearance, this also means its centre of gravity is quite high. With all that weight on board it can just be a matter of coming off the throttle a touch early over a jump, for the model to tumble over into a crash landing.

By holding down the set button on the transmitter (and nothing else) you can enable the ‘self-righting’ system on the model. This pulses the motor forward and backward, using the inertia generated through the model to flip the truck back onto its wheels.

When it does work, it is fantastic, rocking back and forth until it flips back onto its tyres as shown above. Sadly if the truck is on anything but a flat and stable surface we found the system struggled. Indeed the truck would often unbalance half way through the process, erratically bursting power through the drive-train resulting it frantically spinning its wheels whilst laying on its side. Thankfully you can cancel the self-righting procedure by hitting the brakes.


This sort of tomfoolery is what the X-maxx was built for! From the skatepark to the pump track, the Xmaxx has the power and strength to fly high, land hard yet carry on regardless.

The massive dampers with their big springs enable to truck to shrug off landings that would kill lesser RC models.

The trick to maintaining the attitude of the truck in the air is in the throttle control. Leaving a touch of throttle will often keep the truck relatively level. Braking or aggressively lifting from the throttle will cause the truck to ‘nose down‘, useful if you have opted for a ‘full send’ off of a jump with a big kicker.


Battery selection is important for the X-Maxx. Ensuring you have cells that can power that ESC will allow you to make the most of the model. As expensive as it is, at nearly 10kg with the cells in, you definitely don’t want to run out of juice miles from base!

We’d also suggest getting hold of the Traxxas link system which will allow you to monitor live, the battery status of the truck via a bluetooth link to your phone.

The X-Maxx is ‘wheelie’ good


The standard X-Maxx party piece has to be prolonged wheelies. The first time you get hard on that throttle your heart stops until you realise that it comes with a wheelie bar stopping the truck from flipping over!

To get the truck to perform a sustained wheelie, give it full power from a standing start to raise the front wheels off of the ground. Immediately feather the throttle back before holding the power, the truck will dip slightly before picking up the pace with its wheelie bar firmly pinned to the floor and its nose in the air.


We love how easy it is to stick the X-maxx’s shell on. Nose down and push forward to hook that front claw below the bonnet under the shock towers, then drop the rear down into place. Swing down the latch, rotate 90 degrees and its on! No faffing about with little metal body pins that you invariably lose when swapping out batteries in the field.

However considering the abuse the chassis can take, we are a bit disappointed at how thin the provided shell is! We’d go as far as saying that this is the literally the weakest point of the whole experience. Within a week we had ‘pulled through’ the shell where the body mounting system attaches with four hex bolts. This meant the body would actually lift up around these bolts and off of the shell mounting structure below under acceleration.

A simple preventative solution is to remove the hex bolts and fit small washers between the bolts and the top of the body.

For us it was too late as the bolt heads had crimped off a good 2mm of the shell all around the bolt hole.  Thankfully Dan, was able to 3D print us off a whole load of stepped conical washer-style parts (as seen above) that fit perfectly around the bolt thread and spread out over the shell holding it firm.

Can the X-maxx really ‘walk on water’?


Yes! There are numerous videos on youtube showing the truck hydroplaning across lakes but how is it achieved? All you need are the right tyres! We’d love to know who found out that you can hydroplane the truck, presumably someone who ran a little wide at the beach and didn’t lift? Nothing on the X-maxx is cheap, but paying £140 for sand and water capability seems like a pretty good deal.

What’s next for our Traxxas Xmaxx?


What trails or tests would you like to see us put our Xmaxx through? Beyond an upgraded speed controller, there is certainly little that the X-maxx needs. What modifications should we do? We look forward to fitting some sand paddles and taking to the water ourselves but would be interested in hearing what you would like to see. Leave us ideas in the comments section below.


We have Traxxas’ X-maxx (along with many of their awesome models) in stock and ready to ship. If you have a mainland UK address (and order on any weekday bar friday, before midday) we’ll even ship it to you via next-day courier absolutely free!

The X-maxx’s body is predominantly black but there are three colourways that offer different decals and coloured anodised damper bodies, wheel hubs, toe links, wheel nuts and more. They are available in red, green and blue as pictured in our article.

To get the most out of the car you are going to want to get a pair of Traxxas/compatible 4S batteries. For our article we used two of the 6700mAh 4 cell LiPo’s (that have a 50C burst) to give our truck the punch we wanted. If you don’t have a charger you might consider going for this combo pack that includes the live charger and two of those batteries.